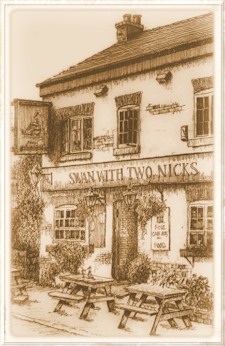 That The Swan with Two Nicks has a long history is indisputable; some parts of the buildings are ancient. However, specific details of its past are hard to come by.

The rich countryside where little Little Bollington now stands has always been attractive to human populations. In the 1980s, on Fairy Brow, archaeological excavations uncovered an oval Bronze Age burial pit containing cremated human remains with a “tanged” knife dating from about 1500 BC.

Anglo-Saxon alewives would put a green bush up on a pole to let people know their brew was ready. Alehouses formed meeting places for the villagers to gossip. They became so commonplace that in 965 King Edgar decreed that there should be no more than one alehouse per village.

By the time of the Domesday survey in 1086, the manor of Bollington was held by the Saxon thegn [Thain] Aelfward who was supplanted by the Norman Hamon de Mascy after the conquest. De Mascy added his name to the manor of Dunham and it became Dunham Massey.

From the medieval period right into the twentieth century, the entire village of Bollington belonged to the estates of the Earls of Stamford and Warrington whose family seat was Dunham Massey. Each building in the village was given a number by which it was refered to in the estate papers. In those days, the formal name of The Swan with Two Nicks was Bollington Tenement No. 17 – not quite as romantic as it is today… 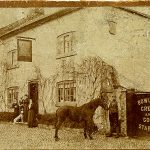 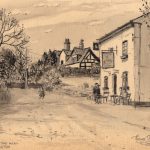 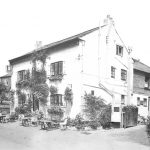 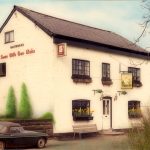 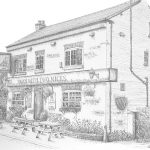 The Origins of the Name 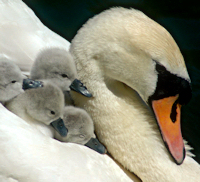 From the 12th century, the monarch has retained the right to ownership of all unmarked mute swans in open water, but in practice only exercised ownership on certain stretches of the Thames. At that time swans were a common food source for royalty.

Swan upping became the means of establishing a swan census. Under a 15th century Royal Charter, the Vintners’ Company and the Dyers’ Company, two Livery Companies of the City of London, are entitled to share in the Sovereign’s ownership and it is they who conduct the census through a process of ringing the swans’ feet.

The annual swan upping takes place during the third week of July. During the ceremony, the Queen’s, the Vintners’, and the Dyers’ Swan Uppers row up the river in skiffs. Swans caught by the Queen’s Swan Uppers under the direction of the Swan Marker are ringed. Those caught by the Dyers and Vintners are identified as theirs by means of a further ring on the other leg. Today, only swans with cygnets are caught and ringed. This gives a yearly snapshot as to how well Thames swans are breeding.

Originally, the two companies made their own marks on the birds’ beaks: one nick for a dyers’ bird and two for a vintners’; today the two Companies use their own rings. This practice provided the name of our pub “The Swan with Two Nicks”. This was a 16th century pun, the word “nick” also meaning “neck”. Humour wasn’t quite what it is today… So we also find a lot of pubs called The Swan with Two Necks.

Here’s a list of what we’ve found in the estate archives:

Lease for 3 lives to Ann Newall, widow of Robert.

Lease for 3 lives from George Booth (1675-1758), 2nd Earl of Warrington, to Ann Newall of Altrincham, widow of Robert Newall of Altrincham innkeeper dec’d, of a messuage in Bollington called the Swan Alehouse (Bollington tenement no. 17), now in the occupation of John Holt innkeeper as undertenant
Consideration: £13. Rent: 5s 6d, Heriot: 20s.

Surrender of the Swan Tenement in Bollington from John Newall of Gorton, Co. Lancs, yeo to George Harry Grey (1737-1819), 5th Earl of Stamford, subject to a yearly rent of £15 payable to Newall for life.

Lessee: John Hodgkinson of Bollington, Victualler.
Property: a messuage and tenement in Bollington now in the possession of Hodgkinson, and fields and parcels of land thereto belonging called the Land in the Town Field, the Berrys Field, the Nearer Rough, the Further Rough and the Highest Rough (3 a. 1 r. 26 p.).
Rent: £1 8s. Heriot: £1. Consideration: £266.

In the 18th Century, they used to say about Cheshire : “the tree of hospitality is seldom out of blossom.”

Other records like trade directories and census records can shed light on later occupants of The Swan. From them we find the following occupants:

“Every private cot is furnished with quintessence of barley and the cellar door is rarely closed. Drinking a jug whilst smoking a pipe and spinning a yarn around the fireside, the Cheshire yeoman’s happiness is complete and he wishes for no other heaven.”

Other snippets from Bollington’s history:

By 1902, the river has become the Bollin whereas previously it had been the Bolling. The Countess of Stamford and Warrington & Earl Egerton of Tatton are still sole landowners of the village. Population in 1901 is 215 (325 in the whole parish). The village is still just called Bollington and the pub is still called The Swan.

By 1929 the pub had changed its name to The-Swan-with-Two-Nicks. Exactly when and why we’re not exactly sure, although if anyone can supply more information, we’d be delighted to hear. We can only speculate as to the name change; perhaps it was to differentiate it from other Swan pubs or to make it sound a little more quaint or grander by giving it a name associated with the ancient swan-marking ceremony on the Thames.